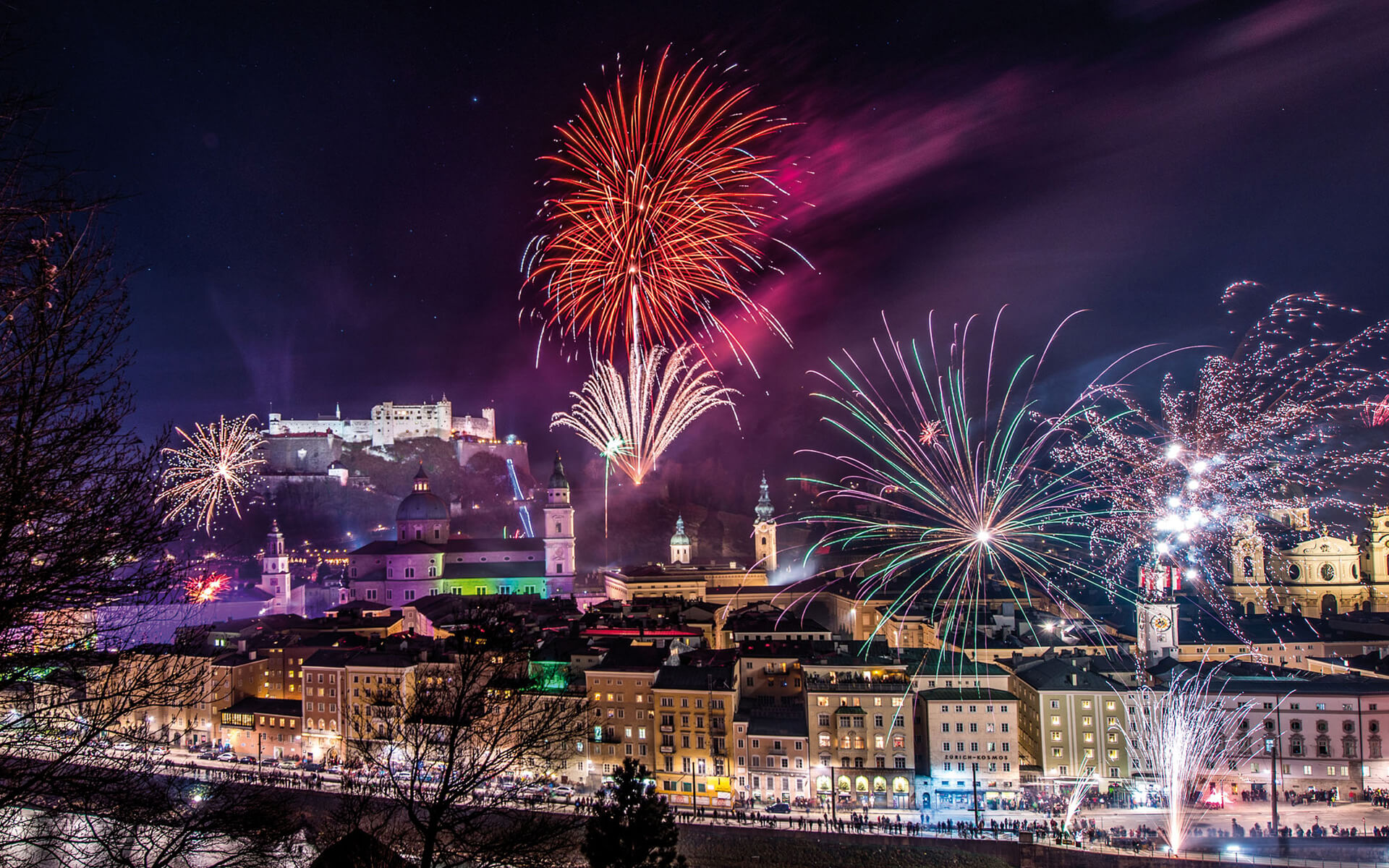 Festivals, Things to Do, ViennaLeave a Comment on New Year´s Trail Vienna / 0 Comments / by womblogger

For 24 years now, the New Year’s Trail Vienna has been an integral part of New Year – just like the traditional Blue Danube Waltz at midnight and the famous Vienna New Year’s Concert.

The visitors of Stephansplatz can dance into the New Year with the traditional Danube Waltz.

With dozens of events and attractions in thirteen different locations throughout central Vienna, the Vienna New Year’s Trail will again be a great open air festival for everyone who wants to start the New Year in style. The programme offers highlights for all tastes and ages – from Viennese waltz, folk music or samba rhythms to current pop hits.

As always, there will be plenty of food and refreshments for the revellers, with food stalls, bars and restaurants serving hot punch, baked potatoes and barbecued sausage. You can even try specialities like fresh rolls with wild boar meatloaf – the gourmet version of a local snack favourite.

If you want to have a drink before you enter Vienna´s New Year´s Trail, the wombars in wombat´s CITY Hostels The Base, The Lounge and The Naschmarkt will be offering Drinks for reasonable prices, as well as Happy Hours for beer, Cocktails and other specials.

We hope you enjoy your stay in Vienna and wish you a Happy New Year. 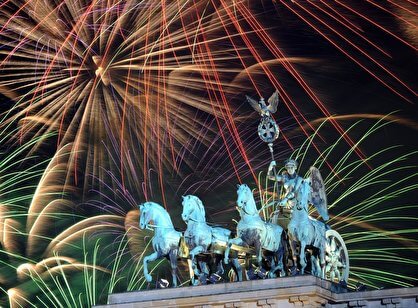 On New Year’s Eve Berlin invites its guests and residents to celebrate the beginning of a new year with a great open air party. Each year bands and DJs attract about one million people to party along the “Straße des 17. Juni”, between Brandenburg Gate and Victory Column until the early morning hours of the 1st of January.
At midnight a massive firework marks the start of the new year.

The party area comprises two kilometres from Brandenburg Gate along the “Straße des 17. Juni” until the Victory Column. The festival programme includes music acts, international stars and performances, light shows, food from all over the world as well as the famous firework. The party kicks off at 00:30 and has no definite ending.

Security Checks at the Entrances

At the entrances of the festival mile security checks take place. Any kind of firework is strictly prohibited. Pointed and sharp items as well as items which can be used as weapons, are not allowed to be carried inside the party area. The same counts for glass bottles and big bags.

If you don’t want to celebrate New Year’s Eve among millions of people and you are one of the lucky persons staying at wombat’s CITY Hostel Berlin, the roof terrace and bar might be the place to be. You’ll have an amazing view over Berlin’s city center and our wombar offers drinks at reasonable prices, specials and Happy Hours. 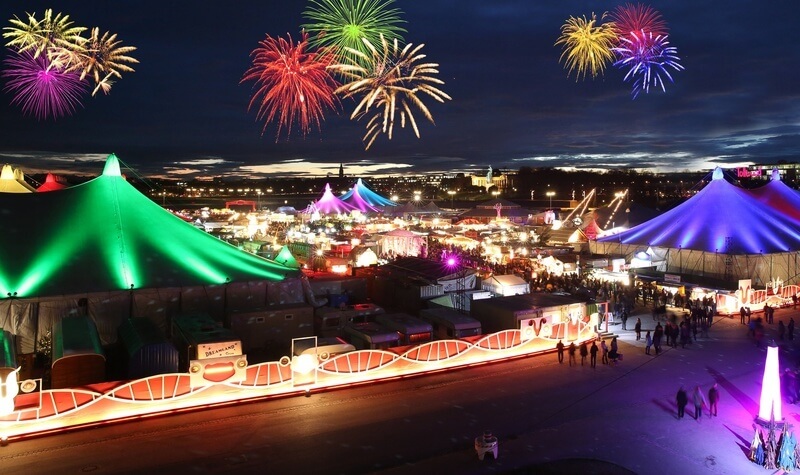 Festivals, Munich, Things to DoLeave a Comment on New Year’s Eve in Munich / 0 Comments / by womblogger

The Bavarian capital Munich, or München to the locals, is one of Germany’s busiest cities when it comes to celebrations. People are on the streets for New Year’s Eve in Munich and celebrate in public with their neighbours, with large scale fireworks displays held across the city, lighting up the skyline as midnight strikes.

Munich is often reduced to the consumption of german beer and sausages, but the New Year’s Eve in Munich has more to offer. The big event in Munich over the holiday season is the famous Tollwood Winter festival on the Theresienwiese. The festival actually starts earlier in December and incorporates live entertainment including live music and circus acts before actually ending in December 31st with a last final big party and fireworks display at the  Tollwood New Year’s Eve Party “Silvester on the Beach”.

It is the biggest New Year’s party in Munich and boasts 5 huge areas enclosed in tents with a wide range of live bands and DJs including Independent, Rock, Alternative, Latin, Salsa, Reggae, Hiphop, Funk, Soul, Disco and boogie. Away from the Tollwood event, crowds gather at various points across the city to watch the famous midnight fireworks displays. Popular vantage points include Englischer Garten and the Bayerischer Hof while the area around the Friedensengel (peace angel) offers fantastic panoramic views of the city.

The Olympic Park and the city’s iconic Marienplatz also attract large numbers of visitors, with the latter in particular enjoying a thriving trade in it’s many bars and restaurants throughout the evening.

If you are searching for a good place to start and end the party, we’d recommend our wombar at wombat’s CITY Hostels Munich. With specials, cocktail and beer happy hours and reasonably priced drinks all evening long the vivid wombar might just be the place to start.

Budapest, Nightlife, Things to Do, Travel TipsLeave a Comment on NYE in Budapest / 0 Comments / by Ben Brokke

Kiraly Street is the place to be in Budapest! All the restaurants and ruin pubs are a couple minutes walk from wombat’s in Budapest, making this location absolutely ideal. As I walked into the lobby, I saw a diverse group of backpackers playing pool and a few sitting at tables looking at maps, no doubt deciding where to go next. What a cool traveler community this is!

I got to Budapest by train, so ended up taking a metro line to Kiraly street where I then walked to wombat’s. Travel time from the train station was approximately 10 minutes, and I had no problem finding it based on website directions. Just don’t forget to exchange your money as Hungary’s currency is the Forint, not the Euro.

At the reception, wombat’s also suggests a few free walking tours, which are a great way to see the city. I walked 90% of the time, even though it was winter, to get where I was going. I would suggest taking a few hours to go through The House of Terror, a museum that details both the Nazi and Communist eras in Hungary. The building itself was the headquarters of several of these groups and it held many political prisoners. Very intense, but interactive, educational, and worth seeing.

In Budapest there are events called Sparties, or “Spa Parties” at the thermal baths. It is basically a thermal bath turned into a nightclub, complete with drinks, mist, lights, and music. Even though clubs aren’t typically my scene, I had to do it for the experience. I bought a ticket for the New Year’s Eve Sparty and it was definitely fun and different, and something I haven’t seen anywhere else in the world! Being winter, it was cold getting out of the pool, but I would imagine in the summer it is just perfect.

Lastly, other than all the obvious historical sights, I highly suggest going to a few ruin pubs. My favorite was Szimpla Kert, a popular ruin pub about 5 minutes walk from wombat’s. It has an outdoor area for hookah, and several rooms full of random decorations. Don’t worry if there is a long line, it moves extremely fast!

My experience at wombat’s in Budapest was awesome and I can’t wait to go back! Budapest is definitely one of those cities that has fascinating historical sights mixed with fantastic food and nightlife. I will definitely be back!

New Year’s Eve is coming our way. If you are in Vienna and still searching for the right place to celebrate the turn of the year, here are some recommendations for you:

Eating out, yummie!
A good diner might be the best thing to start the New Year’s Eve. Unfortunately, most of the restaurants in Vienna are booked out at 31st December… But don’t give up hope, just contact our reception staff in the hostels! They are happy to help you with your restaurant reservation. Or check this website for restaurants opened on New Year’s Eve.

You just love fireworks? Than the hills and viewpoints around Vienna are your places to be to enjoy awesome panoramas of the city’s skyline and the fireworks in the sky. We recommend the Kahlenberg, the Cobenzl, the Himmelwiese or the Leopoldsberg in Viennas 19th district. All of which can be reached with the 38A bus from the U4 metro terminal station Heiligenstadt (just hop on the U4 metro in front of our wombats “The Naschmarkt”). If you want to stay in the centre of Vienna, we recommend the roof of the public library at the Urban-Loritz-Platz (just some 10 minutes walking from our hostel “The Lounge”).

The biggest Party in Austria
If you want celebrate a “traditional” Viennese New Year in the heart of the city and among masses of people; the “Silvesterpfad” (engl. “New Year Trail”) should be your choice. The whole city centre turns into a massive street party, way more than half a million people celebrating. The program includes various performances, concerts, DJ acts and entertainment at historical sights like Heldenplatz, Stephansplatz, City Hall or the Prater. At midnight you can experience the most traditional Austrian way of stepping from one year to the next in front of the St. Stephen’s Cathedral: while Austria’s largest bell, the “Pummerin”, rings in the new year people are dancing the “Donauwalzer” (engl. The Blue Danube Waltz).

wombats!!!
If you want to celebrate with really cool international people, than our hostels might be the place to be for you. All our houses are booked out, there will be parties with our guests and staff with various specials. Just watch out and ask our staff or other guests to get more information.

Nightclubbing
If you like to party all night long, then get into one of Vienna’s best clubs to rock and dance: In the U4, one of the most legendary discos of Vienna, there are four international New Year celebrations, one each hour from 10 p.m. (Sansibar) till 1 a.m. (London). The Flex provides a 14-hour Silvester-Rave, including many DJ’s from different electronic styles. The Fluc also brings up a great range of different DJ sets without entrance fee (yeah!). And those who prefer minimal and dub step should definitely go to the Pratersauna – they present their “finest national artist showcase”.