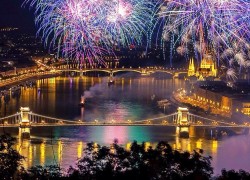 Budapest, Festivals, Things to DoLeave a Comment on New Year’s Eve in Budapest / 0 Comments / by Gregor Kleczkowski
If you are celebrating New Year’s Eve Budapest you won’t be bored. You can pick from plenty of events like concerts, upscale balls, street parties, local house parties and last but not least a party crowd in the wombat’s wombar. With its central location Wombat’s The City Hostel also gives you a variety of options from where to watch the spectacular fireworks at midnight! A variety of specials, happy hours and a DJ will keep the party going in our wombar. Hungarians are very good at partying, especially on these special occasions like the last day of the year, or Szilveszter in Hungarian.
New Year’s Eve in Budapest is something special, so you could also check out one of the three major places of outdoor festivities with spectacular fireworks.

Most Hungarian New Year’s traditions are related to food. Having lentil or bean dishes on New Year’s Day makes you wealthy. Eat roast pork on New Year’s Eve and you’ll be lucky throughout the year. For a hangover we eat a special soup (korhely leves) made from sour cabbage and sour cream. Washing and hanging out the washing is forbidden, because someone will die. According to common beliefs, the whole year will be like the way you behave on 1st January. You’d better be happy to drive away gloominess in the New Year!

Budapest, Nightlife, Things to Do, Travel TipsLeave a Comment on NYE in Budapest / 0 Comments / by Lindsay St John

Kiraly Street is the place to be in Budapest! All the restaurants and ruin pubs are a couple minutes walk from wombat’s in Budapest, making this location absolutely ideal. As I walked into the lobby, I saw a diverse group of backpackers playing pool and a few sitting at tables looking at maps, no doubt deciding where to go next. What a cool traveler community this is!

I got to Budapest by train, so ended up taking a metro line to Kiraly street where I then walked to wombat’s. Travel time from the train station was approximately 10 minutes, and I had no problem finding it based on website directions. Just don’t forget to exchange your money as Hungary’s currency is the Forint, not the Euro.

At the reception, wombat’s also suggests a few free walking tours, which are a great way to see the city. I walked 90% of the time, even though it was winter, to get where I was going. I would suggest taking a few hours to go through The House of Terror, a museum that details both the Nazi and Communist eras in Hungary. The building itself was the headquarters of several of these groups and it held many political prisoners. Very intense, but interactive, educational, and worth seeing.

In Budapest there are events called Sparties, or “Spa Parties” at the thermal baths. It is basically a thermal bath turned into a nightclub, complete with drinks, mist, lights, and music. Even though clubs aren’t typically my scene, I had to do it for the experience. I bought a ticket for the New Year’s Eve Sparty and it was definitely fun and different, and something I haven’t seen anywhere else in the world! Being winter, it was cold getting out of the pool, but I would imagine in the summer it is just perfect.

Lastly, other than all the obvious historical sights, I highly suggest going to a few ruin pubs. My favorite was Szimpla Kert, a popular ruin pub about 5 minutes walk from wombat’s. It has an outdoor area for hookah, and several rooms full of random decorations. Don’t worry if there is a long line, it moves extremely fast!

My experience at wombat’s in Budapest was awesome and I can’t wait to go back! Budapest is definitely one of those cities that has fascinating historical sights mixed with fantastic food and nightlife. I will definitely be back!